A Sony patent to a system and corresponding method for generating user inputs for a video game was published in early February which, at first glance, is hardly surprising, given that video game consoles require input via controllers to navigate the digital worlds they conjure up.

Notwithstanding developments in wireless capability, modular Wii remotes and overpriced VR interfaces in the last decade, PlayStation controllers have more or less retained the same shape and size with each console iteration.

However even the most seasoned gamer may have been confused by the application's illustrated example for a proposed controller for the PlayStation 5 (PS5) console which took the form of a banana.

The application discloses using an input unit operable to obtain images of a 'passive non-luminous object being held by a user as a video games controller', and utilising machine learning algorithms to detect the poses of the object in a series of images. This invention would allow a user to utilise everyday objects as a means of controlling their console, limited only by what is readily available to them.

The application details how virtual buttons would be superimposed atop the user's view of the object in question to allow control of the console, suggesting the additional inclusion of augmented reality (AR) hardware.

A further embodiment describes a two-object controller, in this case depicting a pair of oranges as the control means. This has the unexpected side effect of providing almost half of the recommended five fruit and veg a day to the user.

With regular PS5 controllers retailing at almost £60, and Sony only providing a single unit with the console, there will be big cost-related implications for the gaming industry if the patent is granted. And perhaps the children of tomorrow will have a newfound appreciation on receiving an orange in their stocking on Christmas morning.

It would be desirable if a user could use an inexpensive, simple and non-electronic device as a video game peripheral. 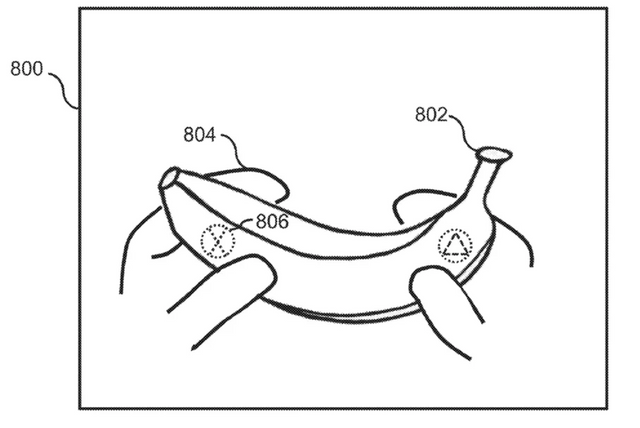